The basic activity of the company Soške elektrarne Nova Gorica - SENG d.o.o. / Limited Liability Company is the production of Blue energy – electricity production from renewable sources in the hydro power plants on the Soča River and its subsidiary streams. 5 big, one pumped storage hydropower plant (PSHPP) and 23 small hydro power plants of a total power of 338,6 MW are at the moment driven by the Soča River and its subsidiaries. 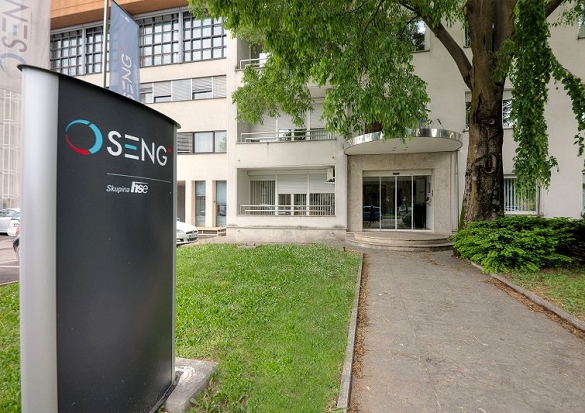 The company Soške elektrarne has respected the beauties of the Soča River Valley for more than half a century. Since its foundation in the year 1947 the company supplies electric energy with great reliability. Today the company Soške elektrarne is a technologically advanced and market orientated company and stands out for its high level of knowledge capital and a very explicit development strategy which includes investments in the refurbishment of the existing and in the construction of new hydro power plants. The today’s water potential of the Soča River is exploited only to its lower third, and the electric power demand is still constantly increasing.

However, the water potential of the Soča River is not being exploited at any cost, but in a way that the natural balance and the beauty of one of the most picturesque parts of Europe is still preserved. Blue energy in our company is being produced in a cost-effective way and with regard to the severe environmental aspects as well as the international standards as many of the water courses make part of the areas under natural protection.

The multipurpose use of the hydro power plants is the result of the company Soške elektrarne having taking a pledge and the reflection of its tight involvement in the natural and social environment of the Severna Primorska region. The company not only supplies electric energy but also collaborates with the local community with the objective to look for development possibilities of the towns and villages situated along the Soča River. Therefore, at the planning of the intervention, attention is paid to the drinking water supply, the fish breeding and fishing, to the setting-up and landscaping of tourist and recreational areas, to the preservation of the technical heritage and to other opportunities for a multipurpose use of the hydro power plants.